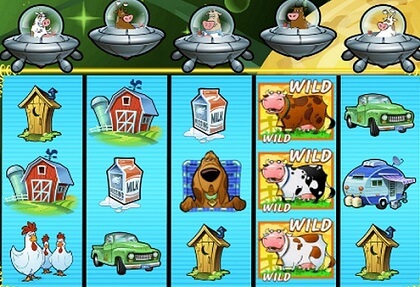 Invaders From The Planet Moolah slot by Williams Interactive features a comic style of artwork that is a great match for this otherworldly game.

The background for the reel in Invaders From The Planet Moolah slot is a space scene. There is a dark black sky with small stars and a bright green planet in the top left corner. In the top right corner there is a light brown and orange planet. Between these two planets is a fleet of alien cows in silver flying saucers with clear domes. Some of the cows have their eyes on antennas while others have three eyes or are quite normal looking. The bottom of each of the space ships rotates around as the cows move up and down in space.

Under the reel, the player can see their lines, bet per line, total bet and win. In addition to this, the formula for the players total bet is given. This is lines multiplied by bet per line. Within this display is a blue planet with green rings around it.

The reel symbols in this game are drawn in the same cartoon style as the rest of the slot. Reel symbols include three red and white chickens and a green and blue camper van that is complete with awning, satellite dish and propane tanks.

Other symbols include an old farmer with a pipe dressed in overalls, a mailbox that is full of letters, and an old green truck. There’s also a symbol of a milk carton with spilt milk, a redneck with a blue hat that is holding a can, and an outhouse sat on top of a green patch of grass. There’s also a bright red barn.

The wild symbols are cows. There is a brown spotted, black spotted and chocolate brown wild cow symbols. The final symbol is a jackpot symbol with three flying saucers over a blue planet.

The five spaceships that are spinning above the reel are key to the cascading reels feature of Invaders From The Planet Moolah slot. Any symbol on the reel that makes the player a winning combination will be zapped by these floating spaceships. Once it is zapped, it is replaced by a new symbol. This gives the player a chance to make another winning line.