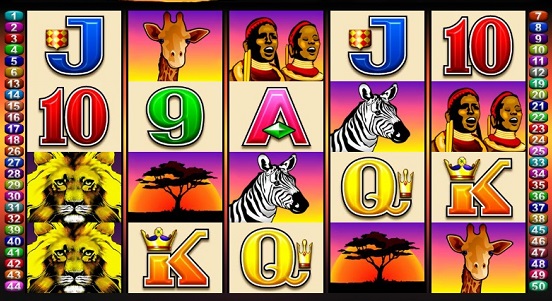 50 Lions is a popular online video slot game produced by Aristocrat Gaming. The game has appeared in many land based casinos throughout the world and has created quite a following. This modern classic is still available at leading online casinos where players can still enjoy the large payouts. The theme of this game is all about African wildlife and features a number of African animals including the lion, the zebra and the giraffe. The backdrop to the game is a type of sunset scene across the African plains where an elephants giraffes appear in silhouette against the darkened sky.

As one of the older slot games, 50 Lions was one of the first slots to increase the number of paylines up to 50. In today’s standards this slot setup seems fairly standard, with a total of 5 spinning reels and 50 paylines. On the reels, players will find a host of African inspired symbols. The higher paying symbols include the lion, the zebra, the giraffe, African woman, and an African umbrella tree. For the lower paying symbols, Aristocrat have used the standard set of high card symbols that have been styled to blend into the African theme.

When it comes to bonus features, 50 Lions is part of the earlier generation of new aristocrat slots that have only the most basic bonus features incorporated into the slot. The main bonus feature of the game is the wild symbol. The diamond symbol plays the role of the wild symbol and only appears on reels 2 through 5. The diamond wild symbol can be used to substitute for any of the other standard reel symbols in order to create a winning combination on an active payline. The only symbol the diamond cannot substitute for is the Protea flower scatter symbol.

The Free Spin Bonus Round